The end of an era, start of a new 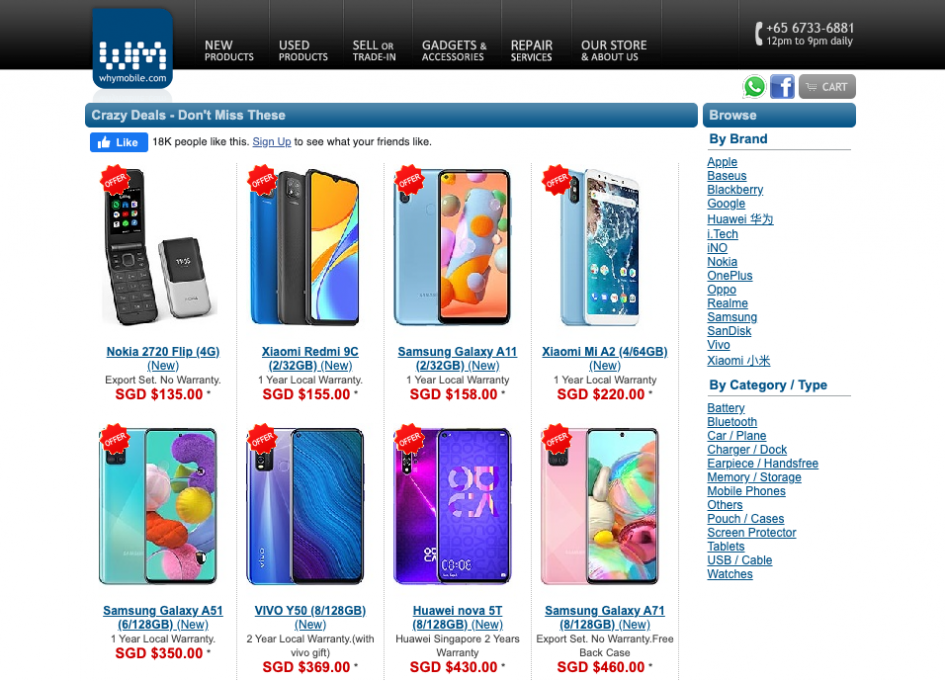 WhyMobile launched the 3rd major revision of its website earlier this morning. But instead of talking about the new site, this is a little journal to reminisce how far it has come.

A proof-of-concept site was first built in April 2004. It was nothing more than a static site with an order mailer form that sends an email. The first version launched two months later in June 2004. It was written in PHP 4.

WhyMobile, therefore, was formally incorporated, and a lot of crazy things happened in the years that followed – including operating an outdoor push-cart in front of Plaza Singapura, to an outlet next to the durian stores in Geylang with “interesting” customers.

The second version (cover image above) was built circa June 2008. It was written in PHP 5 and deployed as a single CentOS 5 VM. It was nothing fancy – no frameworks, no 3-tier architecture, no design patterns, nothing. Just plain old Apache, PHP, and a local instance of MySQL.

The Sun Fire X2100 server where it ran as a VM also had other VMs. The WhyMobile VM was only allocated 512MB of RAM out of the 4GB total on the entire server.

The crummy old Sun server ran and ran and survived a disk failure/upgrade or two, until a time when Cloud services became more efficient and cost-effective. It was eventually wheeled out of the datacenter in August 2014.

So sometime in June 2014, the website moved to DigitalOcean. It ran on a base Ubuntu 14 instance with 1GB of RAM and remained that way for the next 6 years. Minor tweaks and adjustments were made as the business demands changed but never was it upgraded to a newer version of Ubuntu or PHP.

But it was all written in PHP 5, and people have given me weird looks.

No, sir. At its peak, the website was serving around a million page views a month. Remember: it had only 512MB RAM and was sharing it with a MySQL server. It never flinched.

Remember – no bloatware, no frameworks, no nothing. It is a good reference for KISS.

But by around 2017 I knew the website wouldn’t last much longer. Not because it wouldn’t continue to run (there were fair concerns on security, the evolving PDPA laws, and all that) but because many competitors had “upgraded” their websites, albeit sloppily, and I have been receiving feedback that the site looks dated.

I had embarked on several attempts to revamp the website between 2017-2019 but failed. I spent quite a fair bit of time evaluating various PHP frameworks (CI3, Laravel). I was mucking around and having a war with the ORM, and eventually arriving back at square one.

Building the site has always been a one-man-show. A small business like WhyMobile will never be able to afford the skyrocketing salaries of Software Developers in Singapore. I was essentially paying myself over the years, and I “owe” the business an overdue revamp.

With kids and a hectic work schedule, the revamp never happened… until 2020.

2020 came. COVID-19 came. I would be kidding if I said the business wasn’t affected.

During the Circuit Breaker, it wasn’t too bad. Then the trickle-down effect started to become apparent in Q3 2020.

I knew we had to do something to embrace the new work-from-home, shop-from-home, stay-at-home, die-at-home culture. I bit the bullet, picked a framework, committed to it, and then spent almost every single weekend of my spare time working on the code. Son’s at a class? I’m coding. Son’s taking a nap? I’m coding. Son taking a poop? Coding.

The launch of version 3 was intended to be past midnight on Monday 16th November 2020, but AWS was giving me grief about getting SES going in production mode.

And for the record…